Turas – how it came about …

Turas was sparked by the encyclopedia Companion to Irish Traditional Music which was first published in 1999 to alphabetically document the nature and performance of indigenous Irish music. A totally new edition was issued in 2011, doubled in size with c. 900 pages, and is also an e-book. The Turas concert is based on its content, taking an A-Z format to illustrate tunes and song drawn from each Irish county, and from ancient to modern eras. Over an hour and a half it uses the voices of solo, and unison duet and trio instruments, step dance, song in Irish and English, and large-scale photos to creatively document Irish Traditional music. The concert is available also as a double CD album - Compánach - and  a documentary-style DVD - Turas - Virtual Ireland in Music.

The visual motif for the concert is the Companion’s cover image – a profound painting by the Irish artist Daniel Maclise of an 1832 Halloween party in Co. Cork. In vivid colour, this depicts all the elements of Irish music traditions – the piper, fiddler and flute player, the boy with the tambourine, the young learners, the dancers - all performing in an animated community celebration. Present in this image too are symbolically-important figures: one of the earliest folklorists - Thomas Crofton Croker – and an early antiquarian - Fr. Matthew Horgan – both of them contributors to the philosophy which energised the 20th-century revival of Irish Traditional music - of which this concert is the ultimate expression. A reconstruction of the tambourine depicted in the Maclise painting - the oldest image of this instrument in Ireland - was commissioned by Turas of leading bodhrán maker Séamus O'Kane of Dungiven, Co. Derry.

A unique object, this hand-struck tambourine with jingles was the fore-runner of the Irish bodhrán. It invites fresh discussion on the Irish drum, and was used in the 2018 CD recording of Compánach.

Turas takes all its aesthetic cues from Maclise's painting by using only pipes, fiddle and flute. It opens with music collected by Rev. James Goodman which is likely to have been played on that night in Blarney, 1832. It also has song in both Irish and English languages, as would have been common at that time, and has sean-nós style (old style) step dance as a vital percussive part of the performance. It links the past - as depicted in the 1832 painting - with the present. This is partly achieved by the inclusion of newly-composed tunes, but mainly through a powerful visual narrative which has several hundred modern-day shots of musicians and music-making among the nine hundred images of both past and present players and performances. These tell the story of the music visually rather than using spoken commentary. 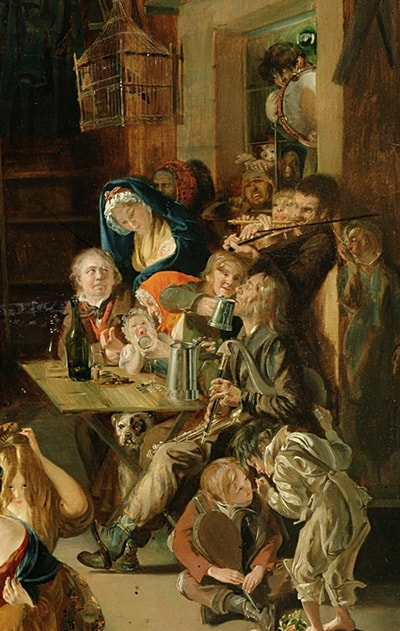 A work in progress, the show has evolved from an educational performance at the Tocane, France summer school in 2012 where a commentary was given in French by linguist Prof. Michael Cronin. Next, it was premiered in its present form, as a music-photographic concert, at the at Centre Culturel Irlandais, Paris, and at The Leuven Institute for Ireland, Belgium in December, 2013. It had its inaugural Irish performance at Ranelagh Arts Festival, Dublin, September 2014. In 2015, it was performed at Aras Chronáin, Clondalkin, and at the From the Mountains to the Sea literary festival at Dún Laoghaire, Co. Dublin in March; at the Séamus Ennis Arts Centre at The Naul,  Dublin, and the Duncairn Arts Centre, Belfast in October, and at the William Kennedy Piping Festival, Armagh in November. Refreshed, expanded and updated, it was performed at Brussels Tradfest, Luxembourg Conservatoire of music, Cork Folk Festival and Ennis Tradfest in 2016, and at Ballyvourney, Co. Cork, and Castlebar, Co. Mayo and other venues in 2017. Its most prestige event was at the Australian National Folk Festival in Canberra, 2018. It was also performed at Hammersmith Irish Centre, London the following year, and had two shows at Fleadh Cheoil na hÉireann, Drogheda in 2019.