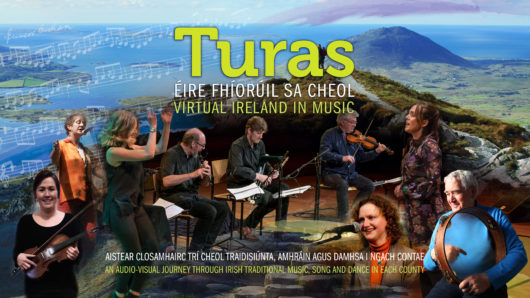 Turas represents a virtual Ireland via music. It is a fast-moving, cross-media concert of traditional Irish music, song and dance which links music and photography.

In response to the Covid crisis Turas is now available as an on-line movie (Vimeo) and in a chapterised DVD format. A Draft chapter, one of the 26 planned sections, can be viewed on the web HERE.

The concert brings together the narrative power and subtle judgment of the the photographer’s eye and the aesthetic precision of musicianship. Following a theme of music and place, it uses photos and historic imagery to tell the story of Traditional music in Ireland and indicate its roots, regions, topography and topicality. A television-style documentary, it has solo, duet and group music representing all Irish counties and Diaspora regions as well as compositions of early and modern tune-smiths. This soundscape is warmed by song in Irish and English and accented by sean-nós, percussive step-dance. 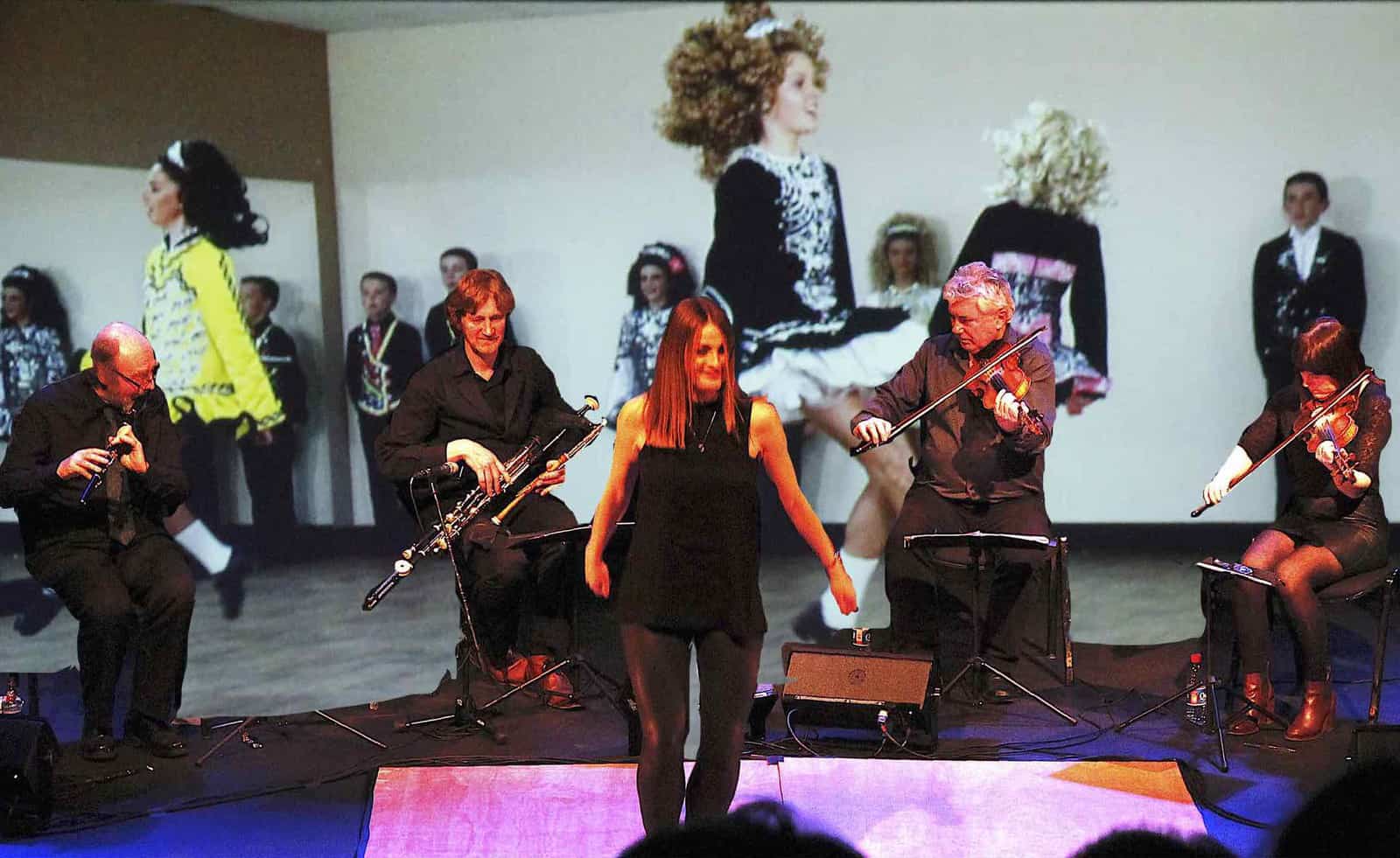 * Thanks to Guy Blitgen for tremendous organisation, to Irish Ambassador Peadar Carpenter for facilitating this event in a superb venue, and to Ralph Thein for the photos

The production is directed by Fintan Vallely, editor of its mentor book, the encyclopedia Companion to Irish Traditional Music, the text of which is turned back into music, a melodic adjunct to a key resource of modern-day Traditional music. The narrative is expanded subtly, by rear-projection and slow changes on a large-scale, backdrop screen: music is presented, as it were, “in” the images. The flow of 800 of these has historical and music tableaux which set off and are shaped by the superb event and landscape photography.

This show might be dubbed ph-usic – a collaboration of photography and live music. Each enhances the other – an interplay of sound, sight and imagination which effortlessly conveys a large amount of contextual and stylistic information on Irish-Traditional music from the 1700s up to modern time. The playing is seamless, but rapidly-changing, 90 tunes running without commentary in 25 sets. The story is subliminal, generated by photos and historical images supported by indicative sub-titles, and by tunes named after places in each county. While the pictures of landscapes and personalities have independent dramatic power, they also greatly expand the music experience, and they side-step the linguistic barriers which can often curtail comprehension among the diverse nationalities who listen to and perform Irish Traditional music.

Music in its place...

The Turas audio-visual concert draws on the idea and content of the encyclopedia Companion to Irish Traditional Music. Being music-based and listener oriented, it presents

Visual imagery has been important in promoting traditional music: in paintings, engravings, and photography, media which continue to be key elements in Traditional music albums and literature. Tunes are given names as an aid to memory, but where the titles describe a locality, they become a map of where the tunes were played or the players came from. This is a feature of early-1900s  Traditional music, when exile in America or Britain led to 20% of Irish tunes in collections from that period mentioning places in this way.

Turas presents a rich sense of these in a singe event using images as narrative, and a varied repertoire in music on flute, fiddles, pipes, song in Irish and in English and sean-nós step dance. Artistically it links the subtle judgment of the the photographer’s eye to the aesthetics of musicianship, an interplay of sound, sight and imagination which effortlessly conveys a large amount of information about the music’s roots, regions, associations and people.

The music is played to a flow of 800 images, 300 of which are photography by the Belgian-Irish Jacques Nutan Piraprez whose life’s work has been with musicians and cultural figures; he has published several books of photography of Ireland and Irish musicians, and provided many album and poster images. His notoriously-vibrant, quirky personality, event and landscape photos have independent dramatic power; they expand the music experience, side-step linguistic and cultural barriers, facilitating understanding among the diverse nationalities who listen to and perform Irish music.

Fifty of the show's photographs are the beautiful work of the Sligo landscape specialist Gareth McCormack, and the balance of images include work by Paul Eliasberg, Carlow artist Eugene Conway, Derek Speirs, Comhaltas Ceoltóirí Éireann, Fintan Vallely himself and prints from historical sources. The show's theme image is a photo of Daniel Maclise's 1832 painting 'Snap apple night' by Co. Meath photographer James Carney.

Turas appeals equally to aficionados of the music and those interested in Irish culture. It has been performed many times since 2013, and feedback from audiences has been universally enthusiastic. The major comment is that the show sets the music's personalities and composers in their times and in home places, giving meaning to older tunes - art in communities - so adding to aesthetic appreciation of Traditional music in a fresh way: it is about artistry, human engagement, history, variety, repertoire, forms and terrains of the music rather than personalities.